Another wash day for my hair, another blog post. It’s been a pretty great week since my last post :). Last Friday I went to Laser Quest with Nick and his research group which was AWESOME!! We did two rounds of laser tag. The first one was a free-for-all round and the second one was teams. Our group was in the maze with a group of little kids which made it a bit annoying but still fun. And that was my workout for the day cause my feet and legs were killing me afterwards. 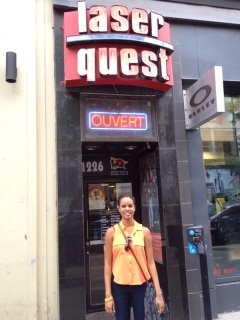 I forgot to take a picture when we went so we went back so I could get a picture. 🙂 I would definitely go back next time I’m in Montreal.  The only problem was that there was this one guy that was in there that kept following me and another girl in our group. There was a 5 second lag after we got tagged and he would stand there and wait for us to regenerate and then shoot us again. Like seriously how stupid is that?? Not even the little kids were doing that. And he just looked creepy.
Yesterday we did my most favorite-ist thing. We FINALLY went ice skating!! We walked down to the building with the triangle on top called the Atrium and there is was.

For someone who hasn’t even roller bladed I think I did ok. By the end of it I was able to skate like half the rink without holding onto the wall and I didn’t even fall! 🙂 Nick was doing fine since he’s been ice skating before but he stayed with me most of the time while i slowly skated around. And that was my workout for that day. So. Much. Fun!
Of course after an afternoon of skating one just has to go shopping 🙂 We checked out the sale at H&M but the stuff there wasn’t so good so we went over to old faithful Forever 21. As usual I can find whatever I want and don’t want there. Nick even found a couple shirts. It’s finally hitting me that I’m actually leaving Montreal next Tuesday, back to New York. My online course is finishing up and its almost time to start the next one. As much as summer courses quicken up the graduating time and everything, I still sort of miss having an actual summer vacation where I get to wake up and do nothing without feeling guilty or that feeling where you have stuff to do. But thankfully I get like 2 or 3 weeks near the end of August to do nothing which will be fun.
Onto world cup news. This has to be the most surprising world cup ever. With so many top teams going home and some underdogs doing well, it’s an awesome tournament. Who could have predicted that USA could almost get a win out of Portugal. Everyone thought it was such a great win for USA but then that sneaky goal got in with only seconds to spare. I was so happy for USA to upset Portugal and I so wanted to see Christiano Ronaldo cry on the field. I was so ready to see that.
Workouts haven’t been going so great as I haven’t been doing it everyday anymore. I had planned to do some today but it was so nice and rainy outside that staying in bed was the only option. Tomorrow things will go back to normal and I will be my very own drill sergeant and kick my own butt.
For now I need to go finish dealing my hair and do some work.
Until next wash day 🙂