I can’t believe it’s already June which sadly means that my time in Montreal is coming to an end in a couple weeks. Things have normalized somewhat and I’m getting back in the swing of studying and not spending all day watching Netflix. My online course is going really well and its about time for “midterms” and projects so it’s going to be a week full of reading and studying. Seeing as it is Monday, I decided it was time for a fresh start. You know the whole “new week new me” thing but mainly I plan to actually exercise and get back on my healthy eating plan. It is so liberating to eat whatever craving I’m having that day but it’s time to get back on that wagon so to speak and eat healthily again. I still have the challenge of finding a caesar salad here to challenge the Wendy’s salad. I’ve only tried the salad from A&W so far but it was good.

I think I’ll try the one from Smart Burger and then McGill Pizza this week. So far from McGill Pizza we’ve had their pizza of course and I tried their spaghetti and meat sauce which I didn’t like so much. Subway had a salad too so I’ll try there as well.
Over the weekend Nick and I went to Reuben’s for breakfast which was amazing! Unfortunately I dug into my meal before I remembered to take a picture but hopefully we get to go back and I’ll take one. I got the sampler and he got the classic. They’re basically the same but mine comes with an extra 2 pancakes. Let me warn you, it is A LOT of food. But it is really good food. We went on Saturday so there were a lot of people there for the Canada Grand Prix. On the way home we stopped at a sort of car show with a bunch of super cars on display like Porsche and Ferrari. 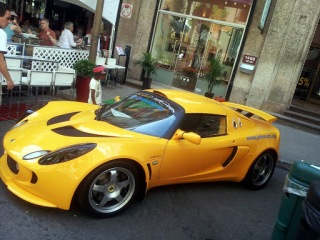 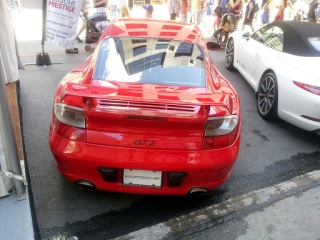 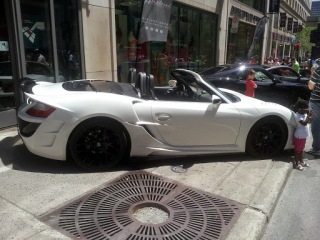 It was a lot of fun and we got to play Forza Motorsport 5 on the new X Box One. We went shopping after and I got a maxi dress and some cheap camisoles from Forever 21 but they didn’t really have anything great. It was either expensive or it was just blaah so hopefully we’ll go to some other stores this weekend. I don’t want to go shopping crazy but getting a couple new stuff would be nice.
Today is wash hair day and right now I’m doing a pre-shampoo treatment but I am STARVING. I did a little cardio today so I’m easing back into exercising. I don’t have a pilates mat but I found a bunch of other things I can do without having to buy a new mat. I think while I do my deep condition I will cook some lunch and make a salad so that I don’t have to buy anything to eat just yet. It sort of feels like I’m finally comfortable here and I can actually get up and do stuff. Like it’s not a vacation anymore. This week I really want to get a lot done so I need to stay active and busy and tomorrow I FINALLY get to go see X-Men (fingers crossed!)
Speaking of movies, I read The Fault In Our Stars last week and as expected I bawled like a baby.

There’s something honest about a person who has come to terms with a sickness and just wants to enjoy whatever time is left. It’s not that they’ve given up but more like they’ve accepted what is to come. I guess it could be a coping mechanism for people in those situations but I’ve kind of always thought like that. Like whatever is supposed to happen will happen so all we can do is enjoy life as it is right now. I sort of developed this way of thinking after watching a movie called Tuck Everlasting.

It’s about this family who drank from the fountain of youth so now they don’t age and can’t be killed. But the son meets a girl who he wants to spend his forever with and asks her to drink from the fountain but his father is against it. When he asks her why she wants to be with their family she says she doesn’t want to die so he tells her “Don’t fear death, fear a life not lived”. I’ve always loved this quote and it makes so much sense.
Anyway, its about time I go wash my hair now and get some food.
Au revoir 🙂