As my latest post said, I am fully in the mood for Hallmark/Netflix movies. I’ve been binge watching them, watching over my favourites and waiting impatiently for the new ones. From the moment I saw even the picture for The Princess Switch I was excited. 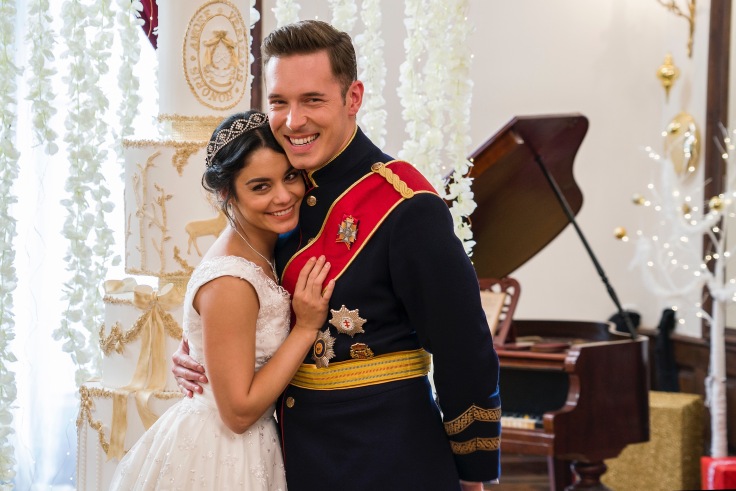 I’ve been in love with how Vanessa Hudgens has been recently from watching her judge on So You Think You Can Dance to just following her instagram so when I saw she was in this I knew the acting was already going to be of a higher standard than some of the other Hallmark/Netflix movies I’ve watched.

For one I loved that the plot was very similar to The Parent Trap. It really gave me the feeling of being a kid again and simply getting to enjoy these two characters experience things for the first time. I loved how it got straight to the point. There was no preamble or too much back story to the characters and they got straight to the point of the movie, the switch. I really have to commend Vanessa Hudgens for being able to physically show two completely different people. From the regal way the Duchess carried herself to the kind of survivalist way Stacey was in how she walked and got things done. It gave a clear distinction for who was who even if they were only shown from the neck up without talking.

The wardrobe for this movie was well done. Each outfit worn matched the character perfectly and showed a bit of their personality in it. Even though it was set in the winter which can be hard to dress stylishly, the different outfits especially worn by the “Duchess” were still modern and stylish. One thing I still can’t wrap my mind around is why oh why the wedding dress wasn’t as big and royal as I felt it should be. I guess one can argue that it showed that she was no longer pretending to be someone and it showed a difference in personality and style but she is still marrying into a royal family. There are still standards to be upheld. That and I really wanted to see the character get all dolled up again and be in the most lavish, fairy tale, ballgown, wedding dress. The dress she wore for the Gala was to DIE FOR. I loved how it was simple and understated but the colour demanded attention.

The casting for this was also perfect. Without the character talking or doing much it was easy to see what they would be like. Each actor brought something to the story that made it easy to catch onto what role they played. It made it easy for the movie to move along swiftly without dwelling too much on one person’s actions. I must give some extra points to whoever did the abs scene. I literally watched that scene about five times  before moving on with the movie. And then to find out that the actor is British just made me melt. Then I realised he’s the same guy from Shadowhunters and I wish they let him keep his accent… while his shirt was off 🙂 Also I did find that the prince, played by Sam Palladio, has a face like Benedict Cumberbatch from the nose down. The way their mouths form words is basically the same.

Overall the movie was good. I laughed, I was drawn in and I became attached to the characters very early on. What I love is that it wasn’t some big blow up at the end once the switch was found out. It was handled in a way I feel like adults would deal with it and it wasn’t dramatized just for movie sake. It made it all the more realistic for me which makes me really want a sequel so Netflix, please work on that!