Well, I had a great weekend. On Saturday I went to BeautyCon for the first time. I’d only watched other people’s videos on Youtube so I only had a small idea of what to expect but I knew it was going to be a long day. I left home a little later than expected so I got to Pier 36 around 10 and joined the long general admission line. And there I stood until about 12. The doors for general admission were scheduled to open at 12:30pm so I was happy we got to go in a little early since I was FREEZING MY BUTT OFF outside. It wasn’t overly cold but standing under a bridge for an extended period of time with high winds can make anyone cold. The meet and greets that others payed extra for were outside so I happily walked right past them into the warmth of the building and was immediately hit by how large the crowd inside actually was. I did a little lap of all the stalls to see what was where and which booths had the longer lines. Then I started out to see what they all had.

My first stop was the inside stage where Jeannie Mai literally walked RIGHT PAST ME to get to the stage. I was in such shock that I didn’t even say anything or try to get a picture. I was a little star struck. I was going to stay for the talk but I had already missed the talk I wanted to see so I went to see the booths.
Stop number 1 was the NYX booth. I basically stood in line not knowing what they were giving away or if you had to do anything to get their free sample. Turns out you just had to post a picture to Instagram and use their hashtag, easy enough.

This was the longest line once I got there so I figured they must have been giving away some good stuff. It was a free ice cream and a lipstick. 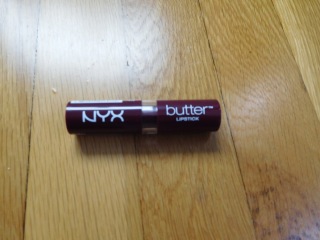 There were other shades but I don’t own a deep read like this so now I do! 🙂 Of course being lactose allergic/intolerant I didn’t take the ice cream but the lady gave me a weird look when I said I didn’t want one. That and who would want an ice cream if they were only noooowwww defrosting from standing outside for 2 hours??
Right by the NYX booth was the media area so I kinda stalked it out and got really close to Jay Manuel and Chloe Lukasiak.

After that it was time to tackle another long line, Maybelline. Once again I had no idea what was happening at the both but where there is a long line there is usually free things being given away. I somehow got to this line when it was pretty short and right when I got there the line got really long behind me so that was a stroke of luck for me. Heeerrreee I got a makeup pouch and an eye liner.

Turns out the line was long because the did the screen printing on the bag there for you which was cool.
The next line to tackle was the longest, QVC. I figured that since the line was so long that it should be good but it took  me an hour and a half to realize that it wasn’t. Others who had gotten through the line explained what we were waiting for but I waited anyways. While waiting we got caught up in the crowd surrounding Bethany Mota and through that I made friends with some of the people around me and we saved the other’s spot while they went to other lines and booths. While in line I got to go to the Chic Cosmestics booth for one of their events. I was lucky enough that they handed out tickets for their booth during my 2 hour wait outside but some people weren’t so lucky. In all I got some good stuff from their booth. 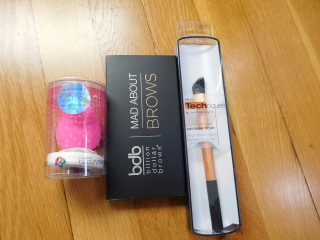 There were 4 events but I only got to go to 3, I missed the first one.
When I finally got to the front of the QVC line it was basically 8 products and you got to choose 4. I’m really not adventurous in body washes or face washes so I basically just got lip products. The safest option.

I’m curious to try the Mally lip gloss but the other stuff is basically just to try out. The nail polish was the only thing left that wasn’t a body wash. There was also a cookie but I ate it….
Next to QVC was a booth for Wen and they gave away a FULL SIZED bottle!!

I know these usually sell for around $50 so I was really surprised that they gave it away to anyone. I don’t use Wen but I know that my aunt does so I want to surprise her with it.
What I thought was my last booth where I heard they were giving away a Taylor Swift bag that was apparently worth $40 so that alone would make my trip worth it. You had to spin a wheel to win it and unlucky for me I won a Justin Bieber hair perfume…. 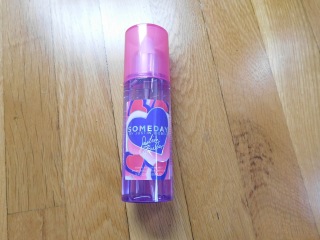 I’m not too sure what I’m going to do with that yet but I’ll see if I know anyone that wants it.
I made one last lap of the building and realized that the line for Tarte was pretty short so I stood there and waited to see what was going on since the line was long for the entire day. In less that a minute a nice lady handed me a sample of their translucent powder.

I’m thinking I might give this to Brianna since she’s looking for a good one. She’s still fixed on the Nars powder but until I can get her that she can try this :).
On my way out I got a sample from the Garnier booth.

I am also not too sure about how this is going to work with my hair but I’ll try it first. The other stuff I picked up was from a brand I’m not familiar with but it was a good bag to put stuff in. 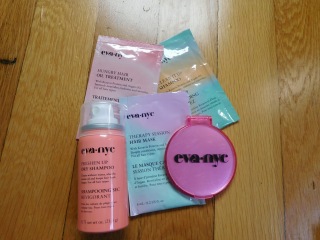 They gave away some dry shampoo, a hot oil treatment, conditioner and a compact. And that was all of the stuff I got.
Even though I didn’t pay for the meetups I still got to meet some of the Youtubers that I watch which was awesome. A win win for me. I first went to the meetup with the GlamTwinz, Kendra and Kelsey at the Carol’s Daughter booth. 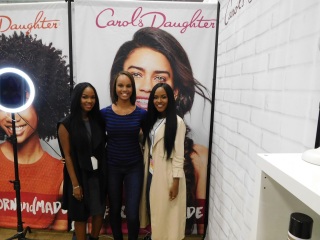 They were the only ones I thought I was going to see but on my way back from them to the QVC line I saw all the other Youtubers that I watch. 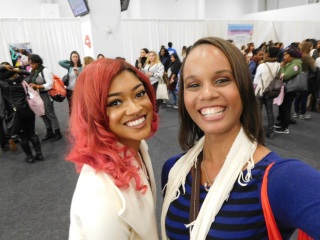 So I saw Jayla, The Glamaholic, and Bri, Smartista Beauty which was really cool. The ladies in the line with me said I looked really happy when I saw them so there’s that. At first I didn’t think I would be so excited but I surprised myself.
So that was my day at BeautyCon. It was a fun experience and I met some cool people while we were in line. Honestly for the amount that I paid it was seriously worth it. Now I’m all excited looking for the next beauty event to go to.
Anyways, I’m typing this while getting through my Tuesday night tv shows. Three hours to tv to get through in one night is a lot. Sort of like a marathon.
Later!!
xoxoxo