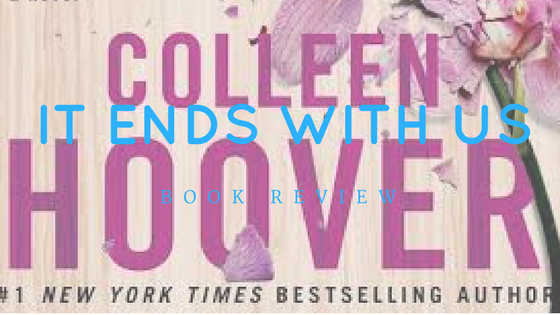 I should have known that with a Colleen Hoover book, no story would be plain and simple. Most of her books always have a larger plot going on that is put there to pull at all of your heart strings. I don’t know why I thought this one would be different but boy did I get a shock when it hit me.

I fell in love with the main character Lily almost instantly because of  how honest she is with herself. I love that she used to write letters to Ellen which to me serve more as a journal than anything else. Reading Lily’s letters gave such a great insight to her growing up and why she wanted to get away so badly. Everyone can relate to something like that. And then to add someone who, in Lily’s eyes, is perfect to look at and I thought I knew how this book was going to turn out. I thought it was going to be a happily ever after book where guy meets girl, girl and guy fall in love but something comes up that makes them thing they can’t be together, they realize that they’re meant to be together and then they finally stay together. The end. This book felt like it was on that path. And then the real story of the book started.

I never expected the twist to be domestic violence. Especially after reading Lily’s journals and seeing what her mother went through. It was subtle and slow at first and I was with her as she was making the excuses for him. The first time seemed like just an accident, until the second time happened. My heart fell with hers when it dawned on her that maybe it wasn’t just an accident anymore, that maybe it was part of  who he was. I also felt for Ryle as he came to terms that maybe he wasn’t the man he thought he was. He wouldn’t even have known because he never did relationships. In a way my heart broke with his when he realized that he couldn’t pass it off as accidents anymore. For him to accept that darkness within him was a big deal.

I love how Colleen Hoover sneaked in such an important narrative into what seemed like the typical romance novel. There was no indication that it would take such a turn and I feel like Lily was just as shocked as I was even though she had grown up with it in her home. The whole story showed that there’s no real way to deal with it. Her mum dealt with it one way and she had to figure out her own way to get through it. I felt like if I was going through it myself and that I had to figure out what to do with her. This book just took me on a roller coaster of emotions. I felt anxious when Lily had to let Ryle’s family know what was going on, I felt Atlas’s anger as he watched from the outside and saw all the signs before Lily did, and I felt the guilt along with Lily’s mother as she had to hear that her daughter was going through what she had endured. This book was just a lot.

But then you get to the part where Lily’s made up her mind about what to do and I felt a weight lift off my chest. The anxiety was gone, mostly because she made the choice I would like to believe I would have chosen if I was in her shoes. The feel of the book instantly got lighter and I could feel myself breathe again.

All in all I loved this book. It gave me another reason why I love Colleen Hoover and why I continue to read her books. Her writing feels so personal and really sucks you into whatever life lesson she’s taking you on. I don’t think I would read it over but only because it was such a heavy story. I would however recommend it to anyone that likes to read. It’s beautifully written and the characters are well developed and easy to relate to. Basically this book has everything going for it so go read it! 🙂

3 thoughts on “It Ends With Us – Book Review”