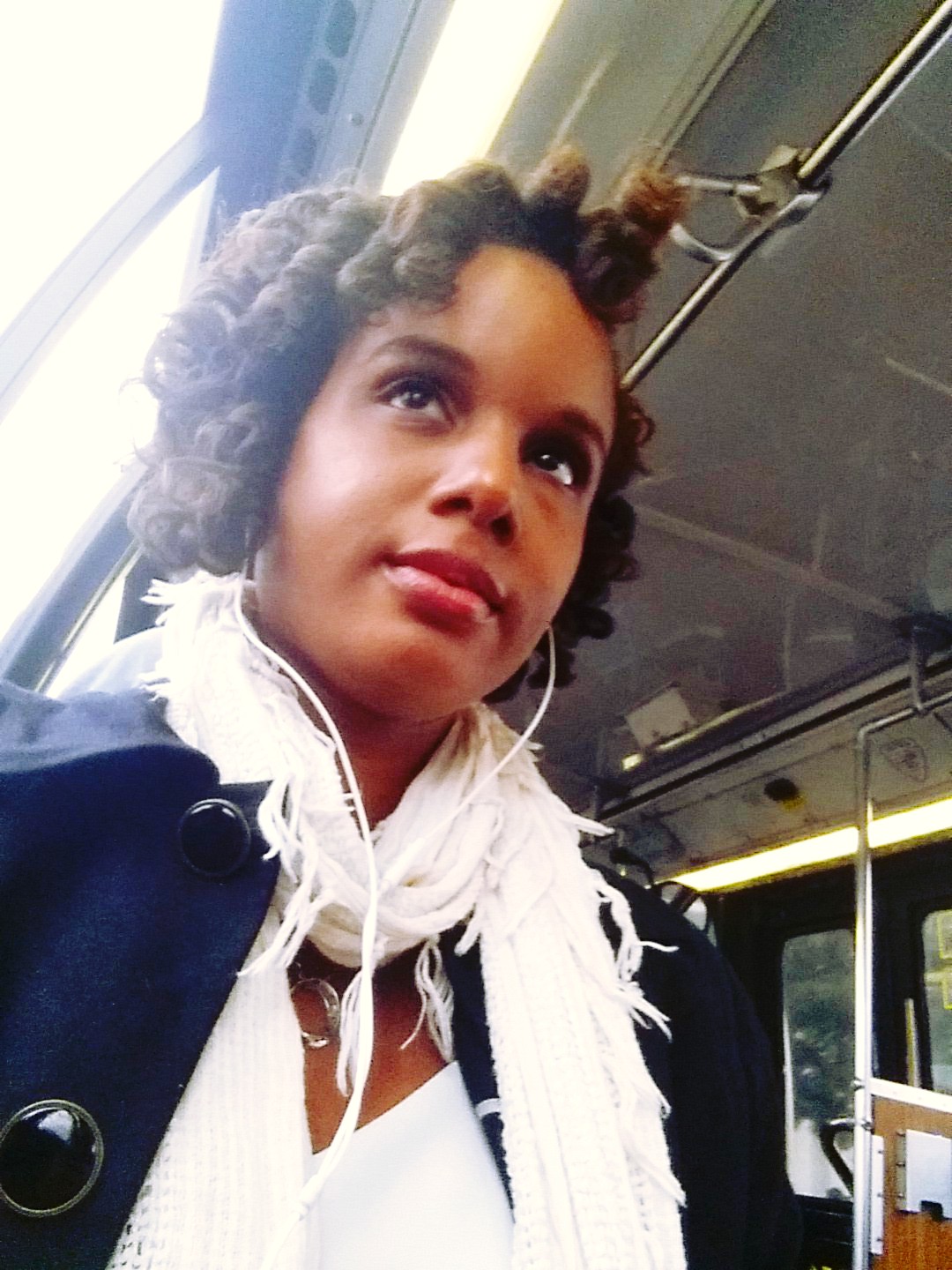 Helloooo again!! I feel really good right now becaaaauuuusssseee I’m back to planning again. I’ve always liked planning out my days or making to do lists. It made me feel really accomplished and then it also gave me something to do that day so that I just do fluff around all day. On the other side I had stopped planning and making lists because when I didn’t get the things on my list done I felt kind of down and unproductive so I’m going to try my best to be realistic with my lists. So to do all my planning I’m back using my handy dandy weekly planner I got from Barnes and Noble last Christmas. I stopped using it when school was winding down and I didn’t have any homework to write in it but I think I need this to avoid another wallowing period. 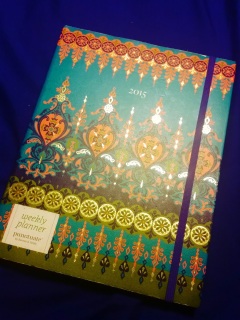 I feel like by using this it should keep me busy and my spirits up while I look for a job. I also stick some post it notes inside for lists and anything I might need reminding of that doesn’t fit into the designated date. 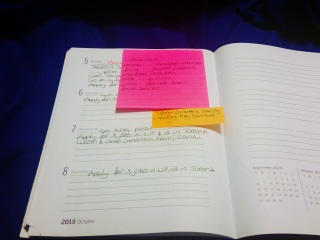 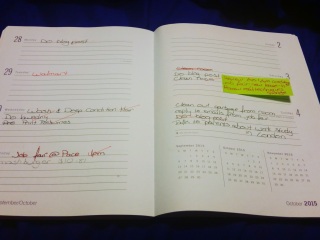 So this is basically what I have planned for tomorrow and next week. I don’t plan so far into the future since I have no idea what I want to do until a couple days before. On the big stick note I have a list of things I need to buy from Walmart on Monday and then I can just check the things off my list on my phone in my app Keep since it keeps a list there. I like to do it this way because I don’t buy everything every week so the list changes depending on what I ate a lot of that week. The little post it has on topics for my blog to keep track of what happened that week to talk about.
In other news, my hair is curly!! 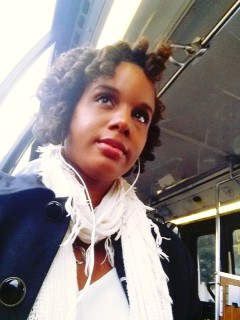 This is the final result but before I get ahead of myself I tried two new products this time. As I mentioned before I got the As I Am deep conditioner to try out and I wanted to try the Shea Moisture leave in conditioner from their Jamaican Black Castor Oil line. First was the deep conditioner. When I was applying it after washing my hair I realized it’s not a thick conditioner. I’m about 10 weeks post relaxer so I prefer to use thicker deep conditioners when I have this much new growth to help soften my roots so this was a bit of bust but not a complete one. Now I at least know to only use it soon after I get my hair done over. It has the same smell of coconut as the co was so that was good. It comes in a really small container so I don’t see it lasting me more than 2 more uses. I can’t remember the price but I don’t think it was too expensive. I’ll have to check. Next came the leave in conditioner. 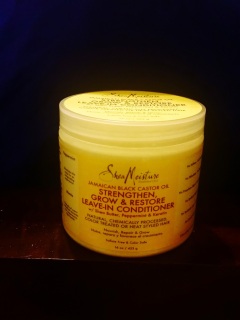 This feels really soft in your hands and when it goes in your hair you can really feel a difference. It really conditions your hair well. My hair was soft and relatively manageable. I can’t really say how much of a difference it made since I put my moisturizers in right afterwards to de-tangle but when I took the flexi rods out of my hair my curs were softer than they’ve ever been. 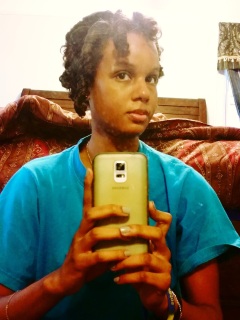 This was after I took out the flexi rods before I separated the curls. I took them out right when I woke up since they were starting to annoy me. It’s really not fun sleeping with those things in your head. As usual the middle of my head was still damp somehow but it all turned out great in the end. 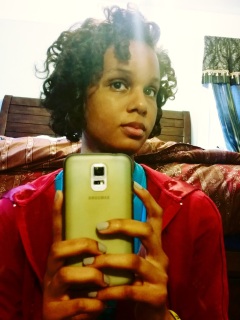 I think it’s safe to say that I have now maybe perfected doing my hair in this style. This is the second time that I remember it coming out close to perfectly. It could also be the fact that my hair is longer but we’ll just say I’ve gotten better :).
One thing I’m working on perfecting is using the Real Techniques sponge. I’m still not sure how damp to make it before I use it and I heard that you could use primer water to dampen it or something so I was trying that but it still didn’t work that well and I know its just me doing it wrong. The next time I try I’m going to simply try water. Hopefully I can figure it out soon.
Right so the reason my hair was curly in the first place was for the job and internship fair at Pace on Thursday. Unfortunately I didn’t get any pictures of my full outfit but it was ENTIRELY from Express except for the shoes. I really should take a picture of it next time and do some marketing for them lol. As usual the fair can be stressful at first before you figure out which companies are there and what they’re looking for. It’s always easier to tackle the upper level first since they have fewer companies there and not a lot of them are finance related so it’s a quick intro for the day. The lower level had a lot more companies which took me about two hours to get through and I still didn’t get to go to a company I was interested in because the line was so long.
There are a few things I don’t like about the fairs at Pace and this is my 3rd or 4th time going. Firstly the majority of the employers want undergraduates. Once you mention that you’re a graduate student and say the word Master’s you can see their face change and they write you off a little bit. In a way it makes me work a little harder to sell myself and convince them that I’d be the better choice but they still only want undergraduates. Secondly if you mention that you are an international student, next to none of the companies there sponsor. I tried to explain my situation with my work permit but that got me no where and they left it as “well if your situation changes”. How with my situation change if I don’t get a job somewhere? And if I do get a job somewhere why would I be contacting a company that still won’t sponsor me? That’s always been a hard thing since there were a couple cool places that really seemed interested until the sponsorship thing came up. Even if nothing comes from going to the fair it’s still good practice for cold interviews and quick introductions which I really needed practice on.
Right now there is a party going on downstairs but I’m not really in a party mood. It feels like a Netflix and chill night with my bed but the music is too loud so I’m going to try to get some writing done instead. I think in my next post I’ll finally explain what writing I’ve been doing.
Anyways, I think I’m going to pop downstairs for some food soon and then maybe go to sleep. Knowing me I can sleep through the entire party no problem.
Baii!! xoxoxo